Gertrude: A dress can’t change anything!

“I can make you the most striking girl in the room”.

I believe in the power of a dress. I believe- I have seen it- that a dress can change people. A good one can boost your confidence and make you feel not like who you are, but like who you always wanted to be.

I’m not here to craft and stitch, I’m here to magnify you, and not just your silhouette, to magnify your personality through my aesthetic sense. I am the fairy godmother, the sea witch, the magical character that allows you to live your dream. I can make you a princess, a warrior, a king.

I have seen shy girls turning into elegant and graceful queens under a pretty dress. I’ve seen men bent by work rise and shine like rulers. One of my costumes can make the event you’re attending absolutely unforgettable, more for you than for others.

I don’t deal with pre-sized, pre-design things, unless it’s a very accurate replica of amazing work from movies and original period garments. Everything I make is handmade, made to measure, unique for the wearer and therefore one of a kind. That reflects on the wearer, giving it a one-of-a-kind glow.

To know what can we achieve toghether, pay a visit to the gallery. To start discussing your personalized project, visit the contact area from the main menu. 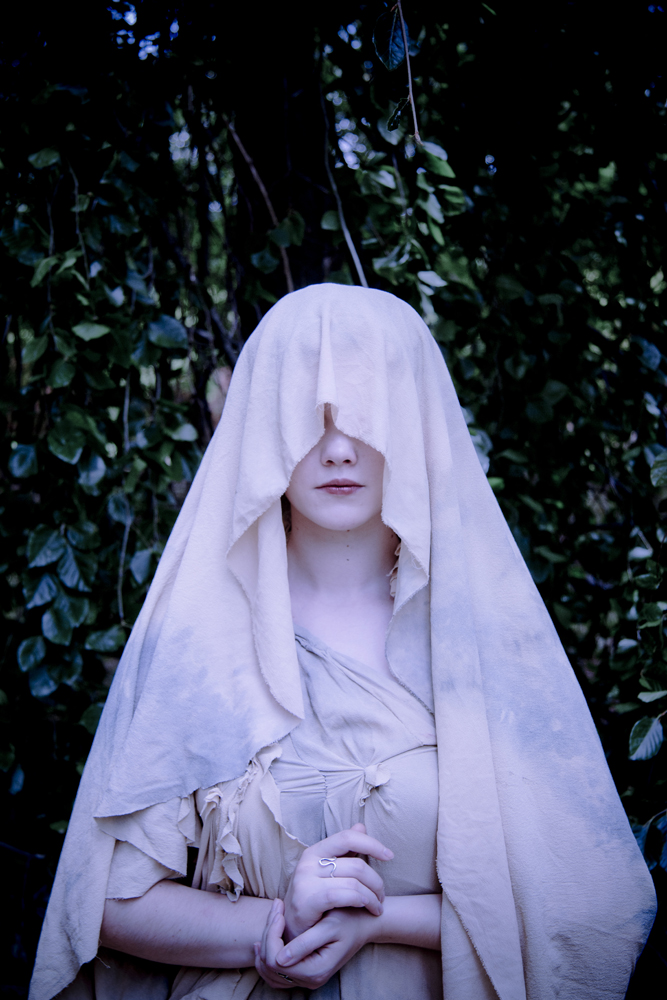 For me it’s quite hard to describe myself from the inside. No one should. You come up with something extremely different from what others can perceive of you. You end up writing not enough or too much, too personal or not at all.

What I can say for sure is that I’ve been interested in beautiful things and how to make them by myself, since I can remember.

I was born in 1991, in northern Italy, in a place close to mountains and sea, and one hour by car far from Venice.

When I was a little girl, I was asked what I wanted to do when I grow up, and I always said without doubt “I want to be a painter”.

Things in life go up and down, but the goal has alway been making a living out of art, no matter the branch of it, as long as it was art and it allowed me to let my creativity flow. I even tried to get a nice, proper, average job, but it felt like my soul was withering.

Once finished primary school, I went to art school.

That school was like a lens for my skills, I learnt how to produce art with a professional method, knowing how to project, how to set the target and what to aim for. Where and how to research, and most of all to struggle for excellence and originality, how to forge my own style and how to let everybody know my work among others at a glance.

Even if not made for fashion, what I learnt there is how to be professional in every type of art, and that art loves us all: when you’re blessed with creativity there’s no boundary that can hold you from switching from one language to the other, just your willingness to learn new techniques and to research.

I had the chance to appreciate being surrounded by other artists, and how helping each others does not decrease the helper’s skill, but enhances it.

Once finished art school, I went to Rome to study ballet and become a teacher. I studied ballet since I was four. But even if I was good, it didn’t feel right. I’d never have the chance to dance, as my body was not made to be a prima ballerina, and I was already too old at sixteen. I would have been just an other frustrated teacher mirroring her dreams on her students.

So I went home and studied to become a physiotherapist. I even passed the test for medicine, but it was a huge undertaking for something I wasn’t sure I’d liked. 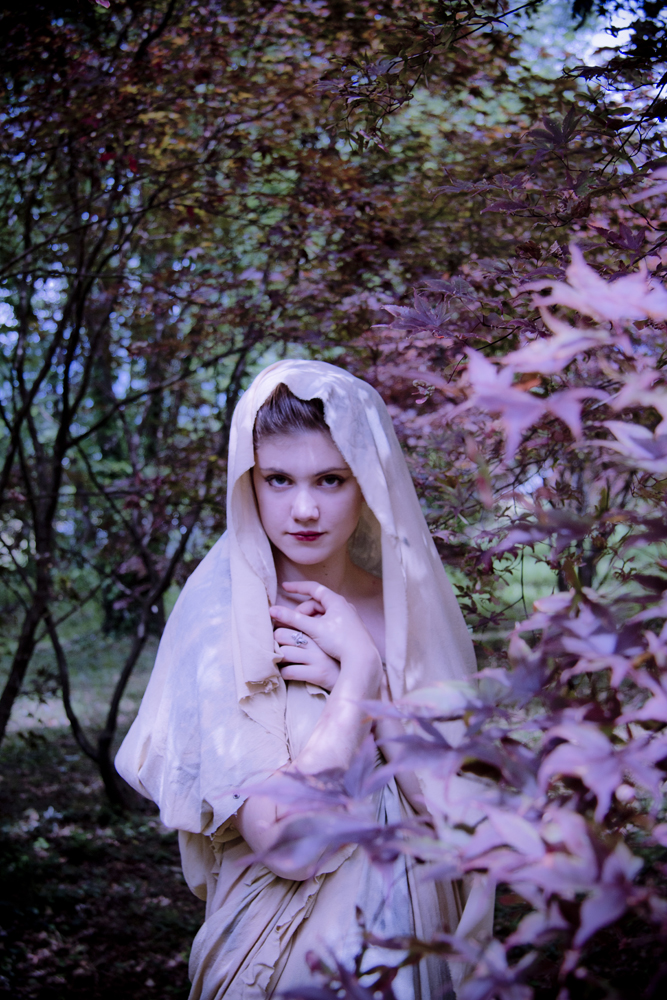 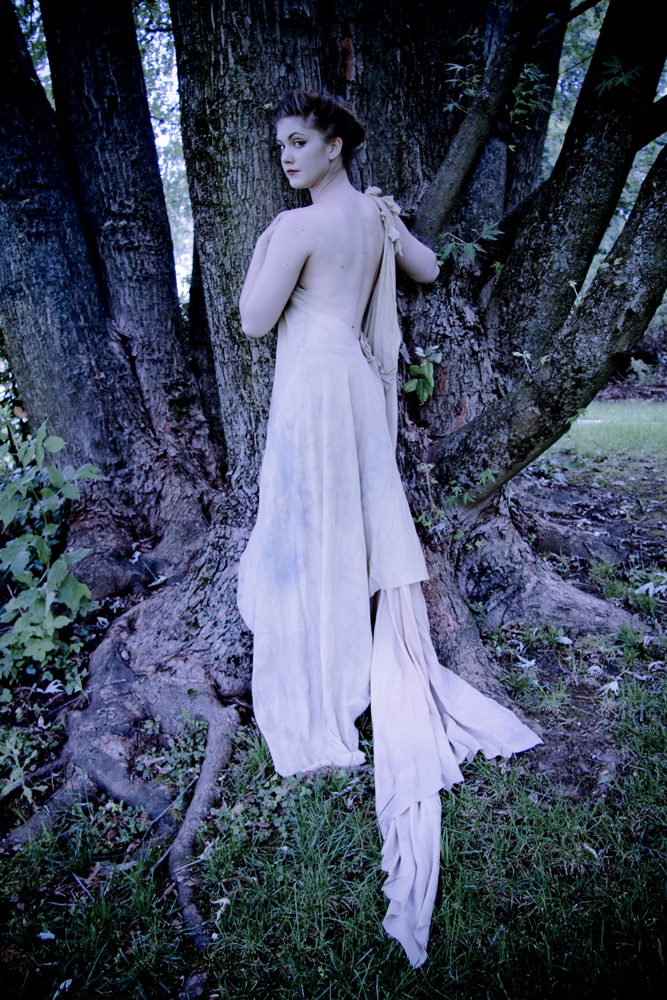 While studying, I started sewing properly. At first it was just a hobby, but then I saw it as the chance of making art I was denied at university.

By the time I graduated, I already knew I wanted to be the artist I had to be, no matter the type of art. And sewing and designing costumes were so incredibly empowering: my success was not limited by my age, nor my my body, just by my skills. And they started to improve with training. Knowing other art techniques always makes learning of new one faster.

If everyone is a collection of scars, mine are here to tell me to never give up: every time someone says I can’t achieve a goal, it’s just a matter of time before I get there. “You’ll never pass the audition for Rome, hundreds try to pass, just fifty are allowed to dream on, you’re just a country girl”, or “You know physiotherapy test is extremely hard to pass, and your art school hasn’t given you method, you know that”.

Now it’s life telling me I can’t become a designer, that hundreds of people with my own dream are crushed against reality every single day, because this world has no space for art, only one in a thousand makes a living out of it. But my dedication, my commitment have taught those around me to believe in my dreams.

And I’m very lucky to be surrounded by loving and supporting peolpe.

I come from cosplay and costuming, and I come from historical clothing.

I started making costumes with the goal of joining Rebel Legion and 501st. These are the official groups for Star Wars, approved by Lucasfilm, and they have standards. Not every costume can join, they all have to be judged and to stick to certain standards and rules, written for that very costume. So you have to start having an eye for details, fabrics, proportions.

This is different fromt he average cosplayer, as my goal was never to just have fun: I wanted the costume, and the best I could have. Year after year I learnt much and remade some of my costume five times, in order to always have the best version around. Costuming gave me the eye for the looks from the outside.

Historical clothing and reenactment gave me the interest for the inside of a garment, the materials, the structure. Because something is not a replica if it’s only similar on the outside, it needs to have the same fabrics and the same structure, to be assembled in the same way. Only this can lead to the very same effect.Historical clothing made my love for natural fabrics grow, and helped me learning construction techniques that are not often used for modern clothing, but are very common in costume making for movies and TV. This leads to costumes that look uch more similar than most of others made by cosplayers. At the same time, sometimes in historical clothing you tend to consider correct costumes that are built in the right way, even if sometimes proportions are not the same, or the palette is not very suitable for that period.

This is why I consider important both costuming and reenactment, why each of them helps me in the other giving me more precision and accuracy. Being a cosplayer makes me a better reenactor, and being a reenactor makes a better cosplayer of me. This is the skill and taste and aesthetic sense I offer to my customers. 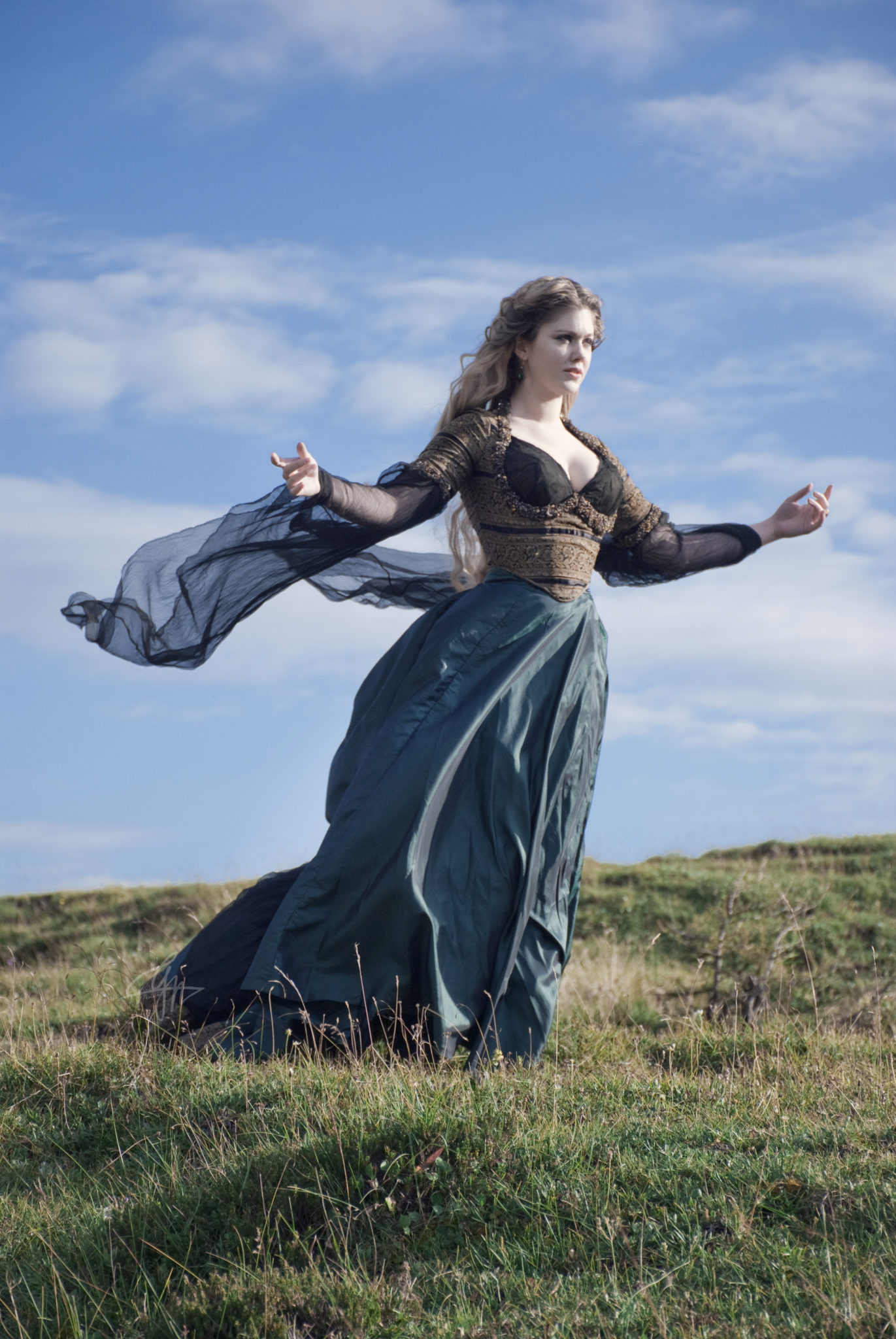 Some CVs start with “I graduated at…I studied at…”.

I studied art at Istituto Statale d’Arte Giuseppe De Fabris in Nove (Vicenza, Italy). I didn’t think my path to be costume designing then, so life led to different directions.

I studied ballet professionally at Accademia Nazionale di Danza for some time, but I went home to graduate in physiotherapy.

I’m self taught in sewing. But I studied how to design and how to bring a design to life, how to have method in that. 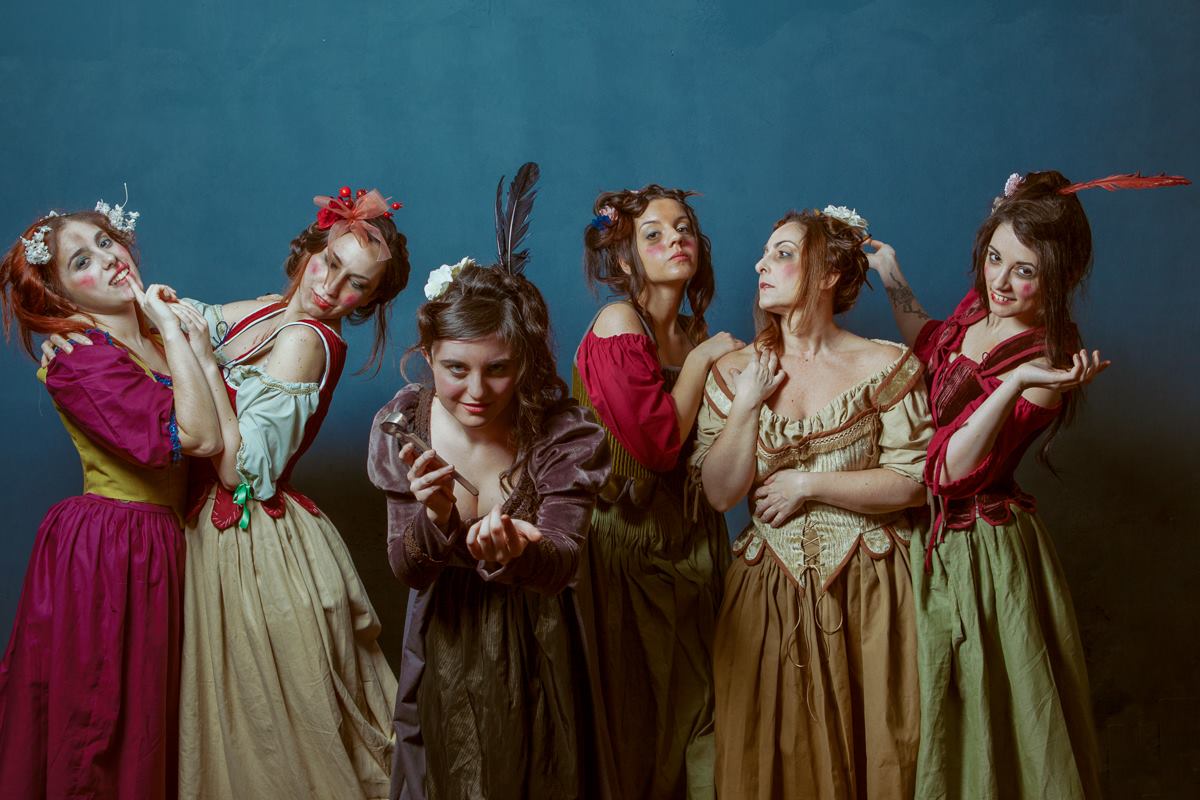 For more, visit her page clicking on the image.

In the last months of 2015 I had the chance to work as costume designer and directo of seamstresses for the musical Les Misérables, by Quelli di Carmen.

Old Souls association selected me and called for volounteer seamstresses.

I jumped into the reenactment world as a young girl, with my family. There was a 1492 reenactment in my hometown, and I was mesmerized by the amount of costumes made by the volunteers. They were very careful: nobles had to have long hair, tan for common people only, no glasses and so on. It looked very accurate, but now I know a lot of their work had polyester in it.

However, I went back with a group of costumers in reenacting, with 1850s dresses.

I made some dresses for me, and some for other girls, who were very pleased.

I don’t work from the outside, but from the inside, from the chemise, the corset, the petticoat. And after that we discuss together the pattern, and the best fabrics. 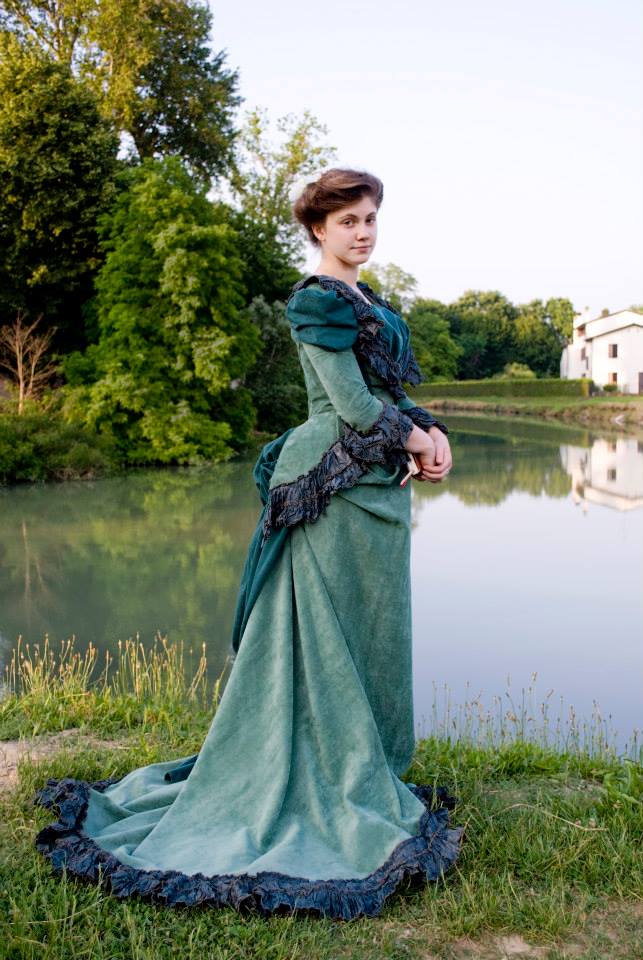 Reenactment is very strict, and sometimes I feel the need of making something more pleasant to the modern eye, but still looking historical. Historical costumes are to movie costumes what reenactment ones are to antique garments.

I created historical costumes inspired by many eras, from the middle age, to the belle époque, for pic nics, and costume balls to theme weddings. You can find many other examples in the part of the gallery dedicated to these works.

Original designs come into the world when I’m free from historical needs. They might be fantasy, sci-fi, or simply something modern. 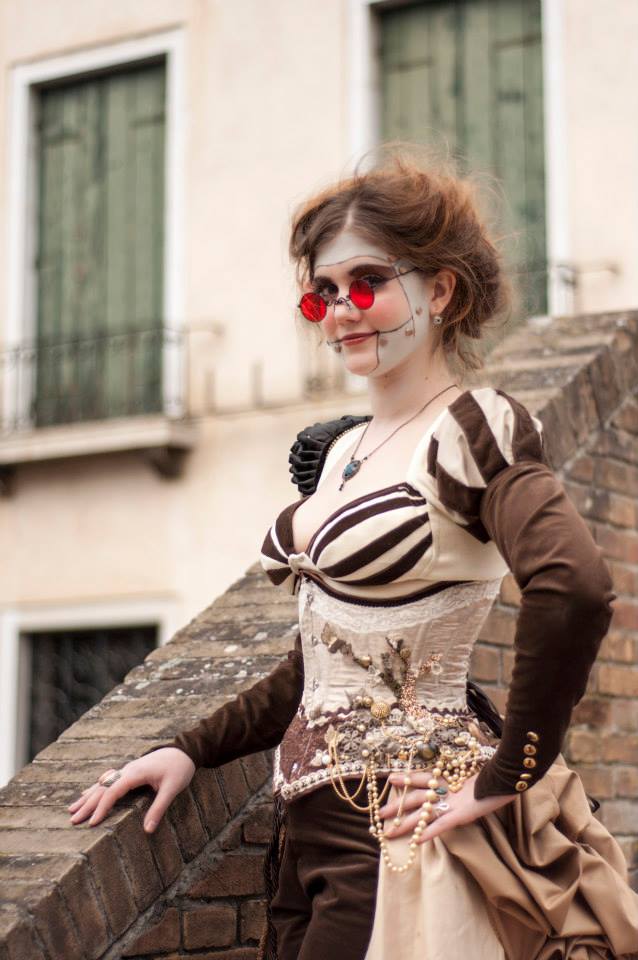 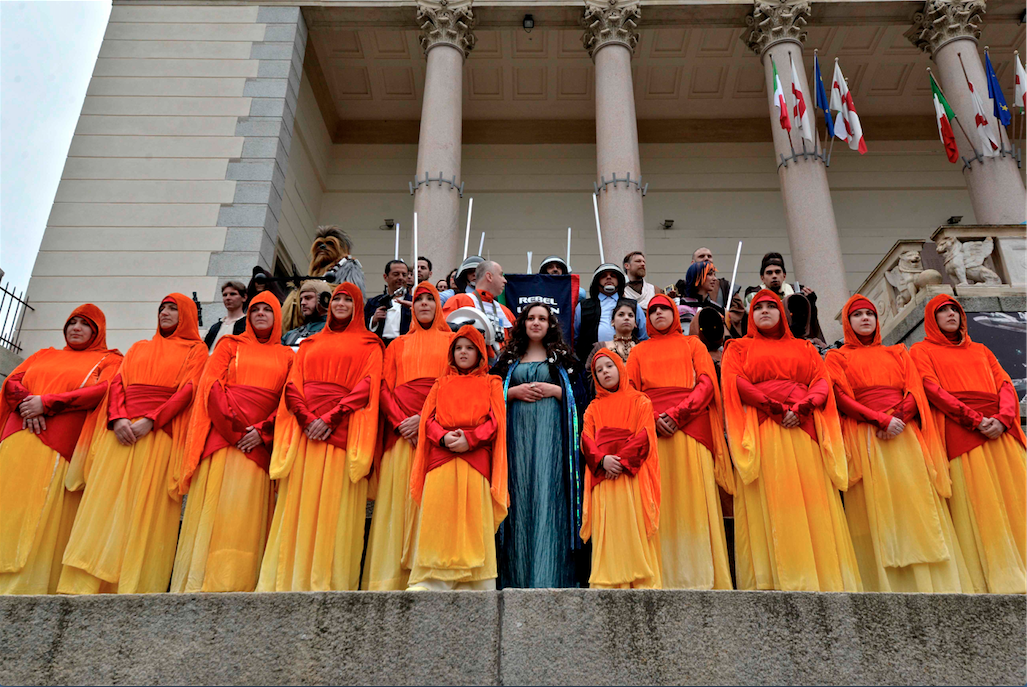 Our handmaidens group for May the Fourth 2015. I dyed all of the costumes (they were 12, but only 11 got worn that day, some of them were on a different person than the one they were made for). Silvia from the golden thimble made two of them, I made the other 10 in just one month. https://www.facebook.com/The-golden-thimble-708332472630694/ Photographer: unknown (write me to add the tag if you know him/her)
Replicas

I don’t fancy the word “cosplay”. It has come to have the meaning that “everything is right, as long as it’s similar on the outside”.

But when I’m in love with a movie costume, I want mine to be as close as possible to the original one. I’m not a team, and my work has the limit that I do everything myself, but this also sets a high standard for every detail, the highest available at the time. So I feel that costuming should be like reenacting: looking for the very same materials, striving for the same techniques, so be able to feel as close as possibe to how it would feel to have that costume on your skin.