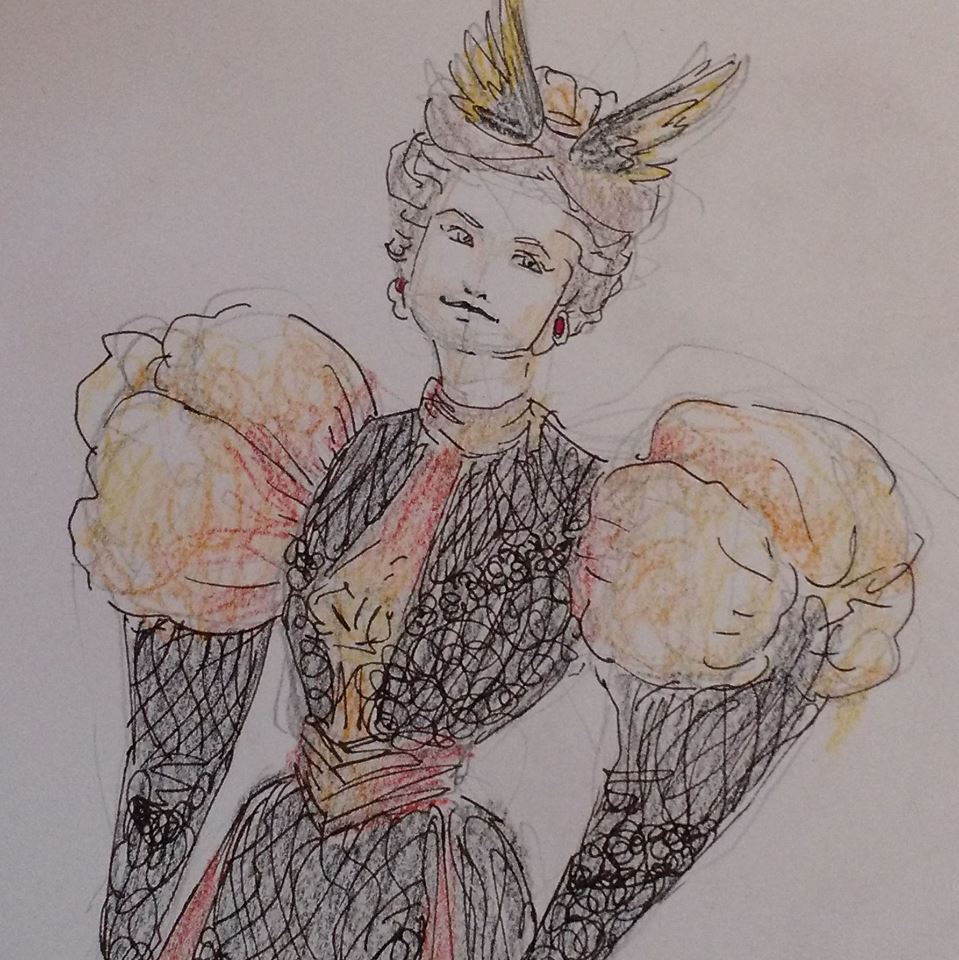 Little. It won’t be little. Guide…I don’t claim to be able to guide, but I think I have come to understand a bit how tastes, lines, fashions changed during this time frame, and I wanted to share this bit of knowledge with others. This wants to be somehow of help when you start thinking about making a dress from 1888-ish to 1910-ish. I’ve been keeping mixing things I liked from years with different aesthetics, and it wasn’t always noticeable, but when you do things right it works much better. If possible, I want to spare you the time I spent trying to understand these differences.

Also take this as an overall guide, not as a source of absolute truth. Even though changes in economy and technologies could have been sudden, fashion always changes gradually. They could have worn an old dress for a less important ocasion, or they could be not very young and fashionable people, and therefore in some way attached to previous fashions. But there was someone extravagant and fashion-forward and daring even back then. This is why I am not giving a precise time frame, like 1990-1993, and I am keeping instead the titles of “mid-nineties” and such.

Here you can see some of these works. They were all three nice costumes, and ones that I deeply love. But they were a bit of a personal mix of elements from different times and occasions. Collodion photography by Dennis Ziliotto makes them even lovelier though.

Fashion in this time frame changed fast, every three years things changed enough to show if you orn an old dress or hat. And we have to keep in mind that this is the time frame when they had strict dresscode for every occasion. Now we can wear the same dress to go shopping and then to a dinner date, just changing makeup, at the time they had morning dress, wrappers, afternoon dresses and walking ones, travelling gowns, dinner, reception, court, ball, teagowns. Wearing a teagown at a ball would have been your social doom. Nowadays we’re not used to this type of rules, so it’s right if you don’t get them at first, but getting things right is nice and empowering, and when the result leases you it boosts your confidence and your enthusism over sewing and creating more.

I will cover the changes of silhouette over the years, and then do a short list of specific changes over each type of some type of dresses.

I had a love affair with bustles, but it didn’t last. Same was experienced by late victorian fashion. With the end of the eighties, we see the bustle getting smaller and smaller. Hoops transform into padding, that gets smaller and smaller until it disappears completely with WWI.

In those years, the skirt was like a cylinder, flattened at the sides. Skirts are draped in flamboyant ways, but they don’t flare at the bottom, except in case they need to make a train, but at the front they’re straight. Pleated trims start going out of fashion. Sleeves are quite tight to the arm, and they don’t add much volume at the top, just what is needed to ease the movement a bit.

The bodice is always tight, but the figure has the volumes and the lines of a gothic cathedral: vertical lines and everything points to the top. It’s tidy, almost, if compared to what follows, still geometrical, still somewhat heir to that taste of trimming that the seventies disinterred from times before the French revolution. The extravagance was in the bustle, and in draping the fabric to cover that. Almost like a theater curtain, or court gowns worn by Marie Antoinette.

I have selected some gowns and fashion plates from 1888-89 to see where the early nineties fashion comes from.

We still have that sense of vertical, but it’s a transition time. And like in all transition times we hve a bit of what it was, and something that forsees what’s coming.

The skirt starts to flare. Just a bit. Like a cone. Not a wide cone, a cone like a pine tree. The bustle is now almost completely padding, but the skirt keeps having more fabric where the lobster tail used to be. Pleated trims are almost gone.

Sleeves start inflating. A bit at the top, at first enhancing that vertical sense. When they’ve done that, they inflate a bit at the elbow, just a bit, but when they co that they have a sort of very long cuff that wraps close around the forearm.

Hair is still fashionable blond, sometimes bleached. Hair changes its volume, focusing at the top of the head. This volume can widen at the sides, but always above the eyes. Bangs are popular, but curly, almost frizzy, sometimes almost like a 1950s poodle hairstyle. The back of the hair is arranged in a braid or a french twist, and the loose end is arranged into a chignon, or curls cluster, always at the back top of the head.

Bonnets start to widen (though of course small bonnets and toques are still in fashion and very much used). They will keep widening from now to WWI. Gradually, like a tide. A bigger wave than the others results a bit out of place. Hats and bonnets widen, especially at the front and sides, like the hat was leaning from the edge of the hairstyle, from the front, to see what’s outside there.

I know suggesting a TV show isn’t the best way to encourage accuracy, but if you want to have an overall idea of the shapes, Gabriella Pescucci is great inspiration, and her work on Penny Dreadful, even if sometimes gets out of the path to better describe the character (which is what a TV show costume designer is supposed to do!), gets you the perfect idea and feeling of volumes, types of embellishment and lines.